What is Parent Child Interaction Therapy

PCIT is a behavioral intervention for children ages 2-7 years old and their parents or caregivers, and is used to increase a child’s social skills and cooperation, improve the parent-child relationship, increase confidence in parents, as well as decrease child behavior problems such as defiance and aggression.

With more than 150 efficacy studies, PCIT training has been shown to positively affect the behavior of children with issues including insecure attachment, aggression, disruptive behaviors, temper, and non-compliance.

Parents are taught in a playroom while being coached by a therapist behind a one-way mirror through an earpiece so parents get immediate feedback on their use of learned parenting skills. This helps parents to learn rapidly the correct use of skills, and keeps children unaware of the therapist overlooking the play session.

What do parents and children learn in PCIT therapy?

During the CDI, parents learn play skills similar to those used in play therapy to engage their child in a play situation with the goal of strengthening the parent-child relationship.

During PDI, parents learn to direct their child’s behavior with clear, age-appropriate instructions and consistent consequences with the goal of increasing compliance from their child. 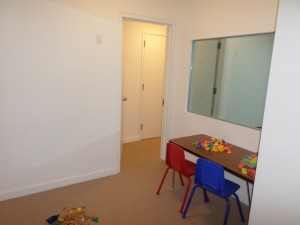 How long does PCIT therapy last?

The length of PCIT treatment varies, but families remain in treatment until parents have demonstrated mastery of the treatment skills and rate their child’s behavior as normal.

The average length of treatment is 16 weeks with weekly 1 hour sessions.

We are one of only a few official PCIT centers in Manhattan.

We have 7 trained PCIT clinicians, 3 of whom are Within Agency PCIT Trainers.

We can provide PCIT either in person or remotely through Telehealth.

We have 2 formal PCIT rooms with 1-way mirrors, and offer PCIT at New York Location:

When thinking about Parent-Child Interaction Therapy (PCIT) many often focus on its effectiveness with disruptive children. What is sometimes overlooked though is how effective it is in mending a parent-child attachment that may have been disrupted due to a variety reasons (e.g., divorce, long work hours, parental mental illness).

Such was the case in the following example, which highlights the positive results of this highly researched treatment method.

“Johnny , a 6 year-old male, and his mother came to treatment after his mother stopped working and was now becoming his primary caregiver again. Johnny had become accustomed to his aunt caring for him the majority of time and therefore was having difficulty adjusting to the change. After the transition, Johnny began to present with oppositional behavior and aggression towards his siblings, but it was clear upon intake that the underlying reason for his behavior was a lack of a secure attachment between him and his mother. This was also complicated by the fact that his mother had a history of depression and therefore often lacked the drive and energy to engage with him in a way that would help establish a positive, warm relationship.”

Throughout the course of treatment, the interaction between Johnny and his mother changed significantly. Below are some examples of the positive changes that were made through their participating in PCIT:

Overall, the above case example highlights the positive outcomes of PCIT not only in decreasing a child’s disruptive behaviors, but also in creating a warm, positive relationship between parent and child that is full of fun, enthusiasm, security and confidence.

In addition to individual PCIT, we also offer several other types of parent training options: