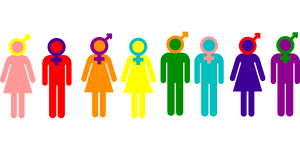 Gender Dysphoria (formerly known as Gender Identity Disorder) has received a substantial amount of media attention recently, with the very public gender transformation of Caitlyn Jenner and award winning shows such as Transparent. Fortunately, public awareness of gender dysphoria has opened the door to increased societal acceptance and understanding for individuals with a variety of gender identities. Despite improvements in the awareness and acceptance of gender issues, children and adolescents who present with gender dysphoria often feel confused and ashamed. Parents and family members may also experience confusion about their child’s gender dysphoria and feel unsure about how to respond. The following is meant as a starting guide for families who are beginning to navigate gender related issues with their child.

First, it’s important to understand the difference between the terms sex and gender.  Sex is a term that describes the anatomy of a person’s reproductive system, genetic makeup, and secondary sexual characteristics. Sex is typically assigned at birth based on a child’s anatomy and is usually male or female (although it is important to note that sex also exists on a spectrum and some individuals are born with intersex conditions). Gender is a more complicated term to define because it is more fluid then sex. Gender refers to the way in which a given society defines the attitudes, feelings, and behaviors of men vs. women. Individuals who are cisgender identify with a gender that aligns with the sex they were assigned at birth whereas individuals that are transgender identify with a gender identity that differs from their assigned sex (e.g., a person who identities as female but was born with male sexual characteristics). Gender dysphoria, which is a diagnostic code in the Diagnostic and Statistical Manual of Mental Disorders, Fifth Edition (DSM-V) is a term used to describe individuals who experience distress or impairment due to their persistent identification with a gender that differs from the gender others would assign him or her. Individuals with gender dysphoria have a strong desire to be treated as the other gender and in some cases to be rid of their born sexual characteristics. Gender is best thought of as on a spectrum as there is increasing awareness of various gender identities that fall outside traditional male or female identities (e.g., bigender, agender, genderqueer). Finally, sexuality and gender are separate constructs and it is important to know that an individual’s gender identity does not determine their sexual identity. For example, a person who identifies as female but was born male may be attracted to women, men, or both.

A normal part of childhood and adolescence is to experiment with different identities and interests. Thus, it is normal for children to sometimes behave in ways that do not conform to societies’ gender roles (e.g., for a male child to dress up as a princess). A small portion of children, however, are very persistent in their identification with a gender opposite or different from their assigned gender. It is important to know that some children, adolescents, and adults who identify with a gender that is different from the one they were assigned at birth do not experience distress and therefore do not have gender dysphoria. However, psychological distress, such as anxiety or depression is often common in children with gender identity questions and in these cases the diagnosis of gender dysphoria is warranted. Children and adolescents with gender dysphoria may benefit from a gender evaluation and psychotherapy or psychiatry services. Some children and adolescents with gender dysphoria choose to socially transition or to pursue medical interventions (e.g., puberty suppressors, cross-hormone therapy, and genital surgery) consistent with their identified gender. In these cases, professional psychotherapy or psychiatry services can provide support for individuals as they move through the transition process and can assist individuals in making informed decisions that are right for them.

Sadly, individuals who experience gender dysphoria are often times marginalized from peers and even their families; in these cases, the risk for psychiatric problems and even suicide dramatically increases. Thus, family acceptance and support can be critically important in the long term outcomes of children with gender dysphoria. Often family therapy or supportive therapy for parents and family members can assist families in learning how to best support their child.