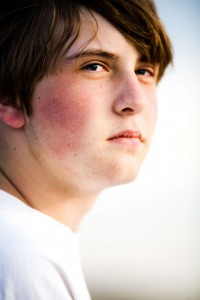 According to the Anxiety and Depression Association of America, Social Anxiety Disorder is the fear of being scrutinized and judged by others in social or performance situations. Social Anxiety Disorder can cause an immense amount of pain for any adolescent who has it. The disorder has a wide range of effects. It can go anywhere from being a minor obstacle in an adolescents life, to ruining the upbringing of a teenager. Fortunately, the symptoms are very noticeable, and if treated early, a child can be alleviated of the many consequences related to the disorder.

Social Anxiety Disorder symptoms are prevalent throughout all facets of a teenager’s life. It can be seen through his temperament, schoolwork, emotional and physical behavior, and a child’s interaction with peers.

Social Anxiety Disorder can have detrimental effects on any teenager. But if a parent carefully observes the symptoms of their son or daughter, they can immediately begin to work on alleviating the effects of the disorder. And if treated properly, a parent can ensure their teenager has a fulfilling childhood without the fear of being judged by others.