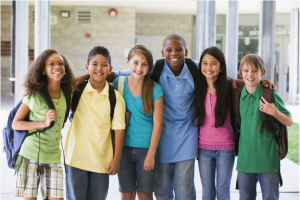 At every party or large family gathering there are always the children who go immediately to play with the other kids and those who might need to hang back for a bit before joining in, or who would rather sit on their own and read a book or just hang out at the grownup table.

At parent-teacher conferences some children are described as being excited to share their knowledge with the class while others need much more encouragement to participate in class discussions so that they can share the knowledge and understanding of the materials that their teachers know they have.

Some parents may have experience with a child who, though seemingly popular, has to be pushed to go out and socialize with her friends or who is constantly worried that she has done something to embarrass herself in front of her friends. Parents who have a child that fits into the second category may sometimes wonder if their child’s behavior is normal or if there is something more going on. There are many possible explanations as to why some children are less likely to join in and play with a group, why they may not participate in class even when they know the information, or why they may not want to socialize with others even though they seem to have many friends. This post will discuss social anxiety disorder (SAD) and provide information explaining common myths and misperceptions regarding the diagnosis as well as treatment options for children who are struggling with social anxiety disorder.

One of the most common misconceptions about social anxiety disorder is that it is the same thing as shyness. And while it is true that someone can have both shyness and social anxiety, they are not the same thing. According to the American Psychological Association, shyness is “the tendency to feel awkward, worried or tense during social encounters, especially with unfamiliar people.” Social anxiety disorder, on the other hand, has a number of diagnostic criteria which include:

One of the most important differences between shyness and social anxiety disorder is that whereas someone who is shy may act less shy as she gets more comfortable, someone with SAD will feel anxious even around people that they know well and should feel comfortable with. Other common misconceptions about social anxiety disorder are that it only relates to performance, and while there is a subgroup of people with SAD that only suffer from performance anxiety, many people with the disorder have anxiety during multiple kinds of social interactions, not only ones that involve performing in front of a group of people. In addition, people sometimes believe that someone with SAD must have suffered from a traumatic event that led to their fear and anxiety regarding social interactions. Although someone with post-traumatic stress disorder may be more susceptible to social anxiety disorder, most people with SAD have not experienced trauma.

Treatment for social anxiety disorder involves both cognitive and behavioral components. With CBT (cognitive behavioral therapy), children will learn coping skills for dealing with their anxiety in stressful situations along with ways to challenge and change their anxious thought patterns that will lead to decreased anxiety in social situations. Social skills groups are also a helpful treatment option for children who may lack some social skills or could benefit from a small and supportive group environment in which to practice and become more comfortable being more social.