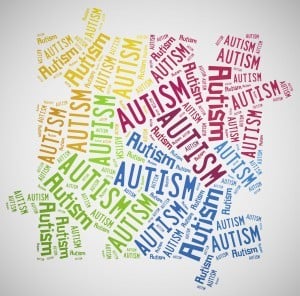 Autism Spectrum Disorder (ASD) is a broad term used to categorize a group of neurodevelopmental disorders that are present from early childhood and affect many aspects of day-to-day functioning. The core features of ASD include

These symptoms exist on a spectrum, and are diagnosed based on severity and intensity of support required (very substantial support, substantial support, and support). Currently, ASD is estimated to occur in approximately 1 in 68 individuals. ASD disproportionately affects boys; however, the expression of the disorder is often more severe in girls. Despite advances indicating a genetic component, the causes of ASD remain largely unknown at this time.

What is the role of the word spectrum in ASD?

In the category of persistent deficits in social communication and interaction, some individuals with ASD “requiring very substantial support” may have little or no verbal language. These individuals rarely initiate social interaction, and may not respond to social overtures from others. On the other side of the spectrum, individuals in need of “support” may be able to speak in full sentences, but struggle to engage in reciprocal conversations or to initiate and maintain friendships.

In terms of patterns of behavior, individuals requiring “very substantial support” may engage in self-stimulatory behavior (i.e., hand flapping) that severely limit functioning throughout the day. Behavior that exists on the other end of this spectrum may include difficulty transitioning between activities, as well as organizing and planning.

Overall, it is important to remember that the behaviors in each domain that make up ASD may exist with varying severity and impact on day to day functioning.

What are the most effective and evidence based treatments for ASD?

Regardless of the severity of ASD symptoms, early and intensive intervention is universally considered to be best practice in treatment. Research on ASD intervention is primarily focused in two areas: Applied Behavior Analysis (ABA) and Developmental Social Pragmatic (DSP).

You can click to learn more about our Applied Behavior Analysis services.

In addition to these treatments, there are a variety of treatments that are currently being thoroughly investigated. These interventions include various parent training techniques, DIR floortime, comprehensive classroom based approaches, as well as PCIT. It is important to keep an eye on the literature, as treatments are constantly evolving, and new randomized controlled studies are being completed.

The following article was utilized in the development of the above:

As the variety of intervention strategies for ASD has increased significantly over time, this article was chosen, as it is the most recent evaluation of what is currently offered in the field. The future directions for research stated by the authors place value on treatments that are emerging as evidence based, supporting the notion that any review of evidence based treatment must be as recent as possible.