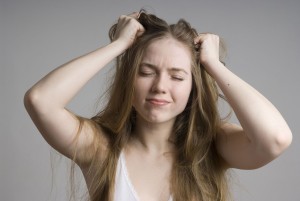 What are Tic Disorders, Tourette’s Syndrome, and Trichotillomania?1,2,3

What are symptoms?
Symptoms normally occur before the age of 18. Most people with TS experience their worst tic symptoms in their early teen years with symptoms dissipating in young adulthood. Symptoms of tic disorders are typically worse during times of excitement or anxiety, and occur less frequently when the person is absorbed in activities, concentrating, emotionally pleased, or sleeping.  Some have compared having tics to having the hiccups, you may not want to hiccup, but it happens without your control, even after trying to stop.1,4,5

What are causes?3,6,7
Prevalence of TS in adults appears to be around .05%, though more study is needed on the prevalence of TS in adults. 3.4% of adults are thought to have Trichotillomania. TTM affects primarily females, whereas males are affected 3-4 times more than females by tic disorders. The cause of TTM is probably multiple genes and environmental risk factors. Researchers believe tourette’s to be hereditary, though other factors may be involved. It’s common for those with tic disorders to also have other psychiatric conditions including: ADHD, learning disabilities, obsessive-compulsive symptoms, anxiety/panic disorder, and mood disorders.

What can be done to treat these disorders?
Tic and hair pulling symptoms can decrease self-esteem and interfere with family life, social acceptance or job functioning.  They’re chronic conditions, and symptoms vary, changing over time. Sometimes Tourette’s disappears entirely after your teen years, other times tics can be experienced into adulthood.5,8

Behavioral therapy teaches a person to become aware of their behavior and helps them change what they do in a careful and systematic way. A comprehensive behavioral therapy plan for tics and hair pulling can include:2,3,4,9