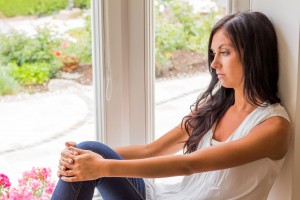 Depressive Disorders:1,2,3
Depression negatively affects how a person thinks, feels, and behaves. Depression typically first appears in late adolescence and early adulthood but can affect anyone, at any age.

Bipolar Disorders:4,5,6
Marked by extreme mood swings, severe highs (mania), and/or lows (depression), bipolar disorder causes unusual shifts in a person’s mood, energy levels, and ability to function. While everyone goes through ups and downs, bipolar symptoms are severe and each mood episode is a drastic change from a person’s usual mood and behavior. About 2.6% of the American population over age 18 have bipolar disorder in any given year. Bipolar typically develops in late adolescence or early adulthood, some may develop symptoms earlier or later in life. Episodes of mania and depression typically recur throughout your life, but there are usually periods that are symptom free.

Symptoms of Mania in those with Bipolar Disorder:4,5

What causes Depression and Bipolar Disorder?1,6,7
Episodes of depression often follow stressful events like marital problems or the death of a loved one. Both genetics and a stressful environment, or life situation, contribute to depression. Scientists are currently investigating how neurotransmitters (chemicals in the brain) affect depression. Environmental factors like exposure to neglect, abuse, and stressful life events can trigger depression, as well as some types of medications. A person’s personality can cause a person to tend to be self-critical or overly dependent or have low self-esteem. Having a chronic medical condition like cancer, heart disease, or diabetes can increase your risk of developing depression. Deficiencies in folic acid and B-12 are also being studied to identify their link to depression. Bipolar Disorder tends to run in families, and certain genes may put some people at greater risk for developing bipolar disorder. Scientists are researching why the prefrontal cortex (part of the brain involved in executive functions) of those with bipolar disorder are smaller and do not function as well as those without bipolar disorder.

How is Depression and Bipolar Disorder treated?
Medications can stabilize and elevate mood, and therapy can help to cope with ongoing problems or specific issues that contribute to your symptoms. Untreated depression and bipolar disorder can cause increased impairment as symptoms worsen, other health-related issues, and even suicide and can negatively affect your relationships, employment, and other aspects of your life. Once diagnosed, more than 80% of depressed patients respond well to treatment. Bipolar disorder is a long-term illness that must be carefully managed through a person’s life like diabetes or heart disease.1,4,7

Common treatments include one or a combination of:7